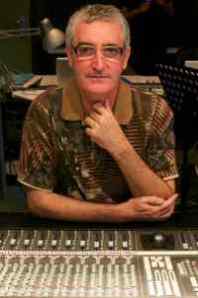 Luis Ivars, a composer from Alicante, Spain, is a chameleon-like musician who has worked in various musical genres throughout his career. He jumped from his classical background to pop, rock and jazz as a keyboardist in bands such as Mediterráneo and Danza Invisible. After 20 years of touring both in Spain and internationally, Luis decided to focus his activities exclusively on composing for audiovisual media. He has written more than 70 scores for film, TV, advertising, theatre and museums such as LA DAMA BOBA, TIEMPOS DE AZUCAR and EL DIOS DE MADERA. CAPITAN TRUENO Y EL SANTO GRIAL is his tenth soundtrack.

John Mansell: Where and when were you born?
Luis Ivars: I was born in Alicante in 1960, a tourist city of the south-east of Spain. Which can be described as a Mediterranean version of California.

John Mansell: You started your career in classical music and then began playing keyboard in various bands etc, when did you decide to write music for film?
Luis Ivars: I spent all my childhood weekends in a double session cinema where my grandfather worked. I often think that was my best school and the seeds of my passion for film music were I think planted then. I recorded many hit records with my band and I also did 20 years of intense touring, it was during this period that I started composing for short or documentary. However, in 1995, I left the tours to start my first film score which was for Tabarka.

John Mansell: What musical education did you receive?
Luis Ivars: Officially, I studied classical piano, counterpoint and fugue and some courses on contemporary and classical composition. But education never ends.

John Mansell: You have scored many types of genre and also have worked on numerous projects including ads and television programmes, would you say there is a specific genre of film or a particular subject matter that you are more comfortable in as a composer or do you like to have lots of variation in your projects?
Luis Ivars: I think the ideal composer for film is like a chameleon. He should be able to change style depending on the environment. He must also have ability of adapting, in the same way an actor who portrays different characters.
I love diversity. I enjoy both London and a sunset in the Sahara. It allows me to learn and experience more. But even though I change style, I try to keep my personality in my compositions. I could say I’m an ocean of wisdom which is an inch deep. 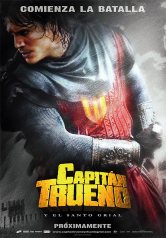 John Mansell:Your tenth soundtrack CAPITAN TRUENO Y EL SANTO GRIAL, has just been issued by Movie Score Media, were you involved in the preparation of the CD, i.e.; did you select the tracks etc that would be released and work closely with the company on the production ?
Luis Ivars: I took great care of the stereo mix process and the mastering of Captain Thunder. It has 90 minutes of music in 54 tracks. Then I started working with Mikael Carlson. He provides with very practical and artistic editing criteria and I studied new editions of the themes. Finally, we were left with sixty minutes of music in 21 tracks, which were placed in the running order as they appeared in the movie. It was a very positive relationship in which Michael displayed his great quality as editor.

John Mansell: Staying with CAPITAN TRUENO Y EL SANTO GRAIL, it is an epic sounding score, has sweeping and wistful themes, anthem like passages and also contains a certain amount of romantic and ethnic compositions, what size orchestra did you utilize for the project, how long were you given to write the score and how did you become involved on the movie?
Luis Ivars: I knew immediately that this work would be long and intense. I spent four months composing, recording, editing and mixing . So I chose a nice apartment which was situated on the 9th floor with spectacular views in front of the sea, the harbour and the castle to set up my studio. It was like being in a lighthouse, very much inspiring and I shut myself up there till I had completed my work.
Once I had this fantastic environment I begun to develop the main theme. Usually I begin doing ambients, easier scenes, but this time I thought that this would make easier my work. And I needed to feel how big the main theme would sound to find the colours and the size of the orchestra. I begun to work with Oscar Navarro in orchestration and finally we decided on an orchestra of 80 musicians.

John Mansell: Antonio Hernandez is the director on CAPITAN TRUENO; did he have a hand on approach to proceedings when it came to the music or any specific ideas or preferences?
Luis Ivars: The first time we discussed the music Antonio told me: “The music doesn’t stop up to THE END. Then, you take a rest for a second and the music continues with credits”. I thought: “Bluff! This is a joke!” But it was true. Ninety minutes of soundtrack.
It is wonderful to work with Antonio. He suggests you certain emotions or a line of action, but he gives you the freedom to create. He lives 400 kms away from me, so I send mp3 to him of what I had composed and then he gave me his opinion. We were sharing the music as I was creating it.

John Mansell: What composers or other artists would you say have either influenced you musically or have inspired you when writing or performing music ?
Luis Ivars: Surely, many of them. But for melodic quality I would say Ryuichi Sakamoto, Ennio Morricone and John Barry… and although it is not my style, Goldsmith even now when I listen to his work still surprises me.

John Mansell: In recent years Spanish film music has really captured the attention of soundtrack collectors, why do you think there has been this sudden upsurge of interest in Spanish scores?
Luis Ivars: It is true that there was a boom in film composers of my generation, which gave very good jobs in the 90’s. But new talents are still emerging, many of these have studied in LA or Berkley.
I think that there is something very important for composers to be able to succeed, that is to have good directors and international films. That is the case of Almodóvar with Alberto Iglesias, who has his third Oscar nomination.
On the other hand, having to compose a brilliant soundtrack for a movie with such low budgets in Spain forces one to rack your brains and creativity.

John Mansell: How many times do you like to sit and study a movie before you begin to get any fixed ideas about what type of music should be written or where music should be placed to best serve the movie?
Luis Ivars: I do tend to spend a lot of time studying a movie or any project I am about to work on. I feel this is the most important process to make a good soundtrack. I try to discover hidden emotional lines, I study the needs to compliment a character. Summing up, I need to feel deeply the emotions and also the story of the film. Then music appears. Sometimes I see a take repeatedly till I begin to play in a subconscious way over it trying to draw the emotions I feel. So, the feeling takes me to the idea and only at the end, to the formal aspect: the score.

John Mansell: Do you orchestrate all of your music for film, also do you conduct your scores or do you prefer to oversee things from the recording booth at the scoring sessions to ensure things are going as planned?
Luis Ivars: I usually work with an orchestrator. We split the blocks (There were four in Captain Thunder along the very last week to be on time) Then, I check his work and I give mine already reviewed, as a feedback which leads us to the target with accuracy. As for conducting, I do like to hear the orchestra in the recording booth and watch the footage simultaneously. This gives me a feeling that allows me to fit the performance and sometimes to make some changes to the score.

John Mansell: When working on a film score do you work out your musical ideas on keyboard or do you utilize computer or maybe you put them straight down to manuscript?
Luis Ivars: There are styles, such as baroque, I need to develop from the manuscript score. I usually work using Logic with many collections of sounds. But everything starts with my keyboard this is when I am looking for ideas or developing the melodies I have in mind. I also like to create the themes while walking along the beach, parks etc.
I hum them in my iPhone or write on a napkin in a bar… you never know when a good idea might appear, but for sure we must not miss it.

John Mansell: Are there any film scores that you have a particular fondness for either by yourself or by another composer ?
Luis Ivars: As I said before, my childhood was spent in a cinema where my grandfather worked at. I lived cinema from outside and from inside. Many years later, once my grandfather died, I went to see Cinema Paradiso. In some way I recognized myself in the child and a roller coaster of emotions overwhelmed me.
The music of Ennio Morricone became memorable for me because of the added emotional burden. I was deeply marked by him. I used all the handkerchiefs of the cinema…

John Mansell: Do you have a set routine when composing a score for a movie, by this I mean do you begin with the main titles or do you tackle more lengthy cues first leaving smaller cues till later in the proceedings, or do you think it is important to have a central theme to build the remainder of the score around?
Luis Ivars: I know that a routine is very important and I try, but… Each movie is different and needs its own individual attention.
To have the main theme to be developed and adapted always works. But sometimes this does not happen; in that case I start with other minor scenes. I always wait for the first editing to receive the sensations from footage, but in “Tiempos de Azúcar” after reading the script by JL Iborra I was so fascinated that I sat at the piano and in one afternoon I composed the two main themes of the film before shooting even a scene.
I would like to know the magic routine, but…

John Mansell: For you what is the purpose of music in film?
Luis Ivars: To become a parallel script to the film, as a second skin which compliments and adds formal and emotional continuity.

John Mansell: Are you working on anything at the moment?
Luis Ivars: Yes I am at the moment working on the music of the video which will represent internationally the Spanish Photographers of Nature in 2012. It will be screened in London… And always in FFACE, Federation for Film & Audiovisual Composers of Europe, where I have tried to do my best as President for the last two years. It is very exciting to share the information and problems of the European composers to find solutions all together to improve the conditions of our work.