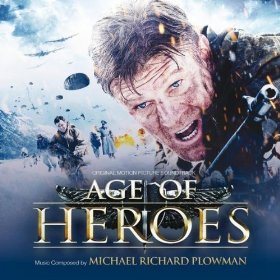 Its seems to have been a long while since we have heard what I call a war movie score written in a style that has patriotism, action and also melancholy. Well British born  composer Michael Richard Plowman has certainly delivered this with his music to AGE OF HEROES, It is a work that is literally crammed with rousing and anthem like passages and also one that has more than its fair share of dynamic and invigorating action cues. The score for me steps back in time to a period when composers such as Ron Goodwin, Jerry Goldsmith, Elmer Bernstein and their like were in demand and were scoring projects such as BATTLE OF BRITAIN, WHERE EAGLES DARE, PATTON-LUST FOR GLORY, VON YANS EXPRESS, THE GREAT ESCAPE and BRIDGE AT REGMAGEN. Plowman evokes this style of scoring within  his rousing and exciting soundtrack and evokes a time when themes were in fashion and rich symphonic sounds dominated the silver screen. The music for AGE OF HEROES is as I have already hinted a thrilling and bracing work, but although it is action dominated the composer still infuses the work with some fine melodic sounding motifs and themes, the inclusion of which lift the score and also boost the action scenes taking place on screen, creating some great moments where music and image work so well together. The style which is employed is not dissimilar to that of the late Roy Budd, it has a freshness and simplicity to it that makes it a rewarding and enjoyable listen. I also think that Plowman displays a sound and style that can be likened to that of vintage British composer Frank Cordell, which manifested itself in Cordell’s scores for HELL BOATS, MOSQUITO SQUADRON and to a degree the action cues in CROMWELL. AGE OF HEROES is a score that will entertain as a collection of music being played at home on an afternoon or evening, and also it works well within the film. Either way Plowman has created a soundtrack that is enjoyable and also he has fashioned a score that re-kindles boyish memories from bygone days, whilst at the same time containing modern styles. Released on the ever industrious ever popular and groundbreaking Movie Score Media. Recommended.