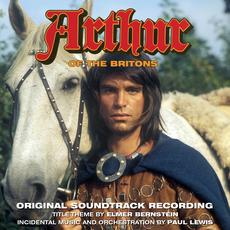 As a teenager I remember the series ARTHUR OF THE BRITONS becoming essential viewing for me on a Sunday afternoon. One of the many attractions of the series was the rousing and epic sounding theme for the show written by Hollywood star composer Elmer Bernstein, now how Bernstein became involved with the series which was a Harlech TV production I do not know, all I do know is that the theme was infectious, robust and bold sounding working wonderfully with the shows opening credits which were fast and hard hitting. Bernstein’s music doing exactly what a TV theme should do and grabbing the viewers attention and setting the scene for some great swashbuckling adventures, daring do, chases, swordplay and inventive story lines that starred Oliver Tobias in the title role, with Michael Gothard as Kai and the ever popular Jack Watson as Llud. The series ran from 1972 through to 1973 and during that time 24 half hour episodes were produced and aired. The series was a little different from the more traditional tales of King Arthur, it places Arthur as the leader of a small band of Celts who are living in Britain some two hundred years after the Romans have left and tells of Arthur’s dream to form a union of Celts, Jutes and other tribes so that they can effectively oppose the Saxon invaders who are arriving in Britain in ever growing numbers. Arthur is helped in his quest to form a united Britain by his adoptive Father, Llud, and his step brother, Kai, who is himself a Saxon foundling that was taken in by Arthur’s tribe.
The incidental music for the series was not written by Elmer Bernstein, the scores for the series were the work of British composer Paul Lewis who had worked on other television and film projects and also was responsible for penning a number of works for concert hall performance. At the time of the series being aired I was not really aware of the composers involvement, all I knew was that the music for the show was very good. Its hard to believe that it has taken some forty years or so for Bernstein’s driving theme to be released and for that I say a big thank you to Silva Screen, the incidental music as some may refer to it as has been issued before or at least a suite of it was made available on a compilation album of the music of Paul Lewis. But this I am sure is the first full release of music from the series. The music that Lewis produced for the series is some of the best I have heard from this period in television, in fact it is overflowing with dramatic and romantic interludes, contains tense and strong thematic material and serves the series effectively. The varied and inventively created elements of the score combine to generate an exciting and overly attractive and entertaining work, which at times conjure up a number of feelings of de ja vu for this listener at least.
Lewis’s music sounds more like a full blown film score as opposed to a television soundtrack, the composer orchestrating and arranging the music to a high standard that is quite honestly on a par with THE VIKINGS and THE LONG SHIPS soundtracks By Nascimbene and Radic respectively, this sound I think can be heard more prominently in track number three, CELTIC HORNS THE LONGSHIP, two rather subdued horns play in unison at the offset of the composition, creating for want of a better word a near restful atmosphere, this mood soon alters as the horns become louder and more threatening in their sound but after a brief period they revert back, again to a softer ambience before more brass is added and usher in strings which then introduce another level of uneasiness, all of the time the horns remain in the background punctuating and supporting, the composer adding wood wind and subdued percussion gradually, thus building the tension and atmosphere of unease and uncertainness‘. Horns are used again as the mainstay instrumentation in track number four, SENTINELS, which although brief is highly effective. Track number five, TO BATTLE is full to brimming with martial sounding instrumentation, woodwind, snare drums driving strings and jagged brass stabs and growls open the cue but are halted to be replaced by a more aggressive sound that is created by swirling strings and booming timpani which towards the end of the composition overwhelms all other instruments. This is an album that should be in your collection, it has been such a long time coming it would be re-miss of any self respecting soundtrack collector, old or new to not purchase it. Wonderfully presented and with marvellous sound quality. The score has a sound to it that could be Walton or even has certain affiliations to the style adopted by composer Frank Cordell on Cromwell and also maybe a gentle nod in the direction of James Bernard, I Recommended this to you without reservation.