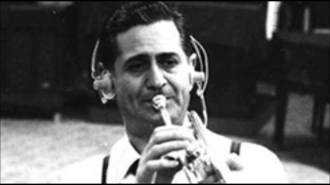 Born in Taranto, Puglia, Italy on January 7th 1922. Michele Lacerenza was to become one of the most important musicians to be connected with the Italian cinema and in- particular the Italian western. Like Alessandroni, s whistle and guitar playing, Franco De Gemini’s excellent harmonica performances and Edda Dell Orso’s unique aural vocalising, Lacarenza was to make his mark on the western genre and also other movie scores with his inspired and unblemished trumpet playing.

Lacerenza came from a family background that was musical; his Father Giacomo Lacerenza was a well known conductor. Lacerenza came to the forefront of Italian film music when he was asked by composer Ennio Morricone to perform trumpet on “A FISTFUL OF DOLLARS”. The films director Sergio Leone had originally insisted on having Italy’s most prominent trumpet player at that time Nini Rosso to perform on the soundtrack, but Morricone wanted to use Lacerenza because he remembered his flawless performances whilst they were at the music conservatory and has stated since that he wrote the piece with Lacerenza’s trumpet in mind.

After playing the films central theme for Leone the great film-maker was said to be reduced to tears because Lacerenza’s performance was so full of emotion. Morricone described him as “A sublime trumpet player” After the success of A FISTFUL OF DOLLARS, Lacerenza continued his collaboration with Morricone on scores such as A PISTOL FOR RINGO , FOR A FEW DOLLARS MORE and THE GOOD THE BAD AND THE UGLY. Lacerenza became much in demand and began to perform on many other film soundtracks, it was also at this time that he had a hit record with a cover version of THE HOUSE OF THE RISING SUN (La Casa Del Sole) a song that had been a worldwide hit for British rock band The Animals.

Lacerenza’s career went from strength to strength and as well as performing on film scores and collaborating with composers such as Ennio Morricone, Nino Rota and Armando Trovaioli he also began to compose music for the cinema and although his output may not have been immense it was certainly important and original. The Maestro also taught music at the Foggia conservatory of music and the Santa Cecilia Academy.  He died in Rome on November 17th 1989. 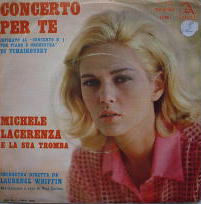 Vocalist Peter Boom appeared on the soundtracks to many Italian productions, his distinct voice gracing the credits of many an Italian western movie. But there is certainly more to this multi-talented man as I found out when I spoke to him during May and July in 2002.
John Mansell: Had you always wanted to be a singer/songwriter?
Peter Boom: Oh, No, when I was in my early teens around 13 or 14, I thought about studying theology, but by the time I reached my fifteenth birthday I had changed direction in my studies and moved onto psychology, I thought that this was more modern, and then at eighteen I left school to start my studies of BEL CANTO (Shubert Leiber Opera).

John Mansell: So what was your first encounter with singing on a film soundtrack?
Peter Boom: Well, I first did a test or audition for RAI, which is the Italian TV and Radio service, this went very well, in fact the members of the selecting committee that were auditioning me all stood and applauded my trial performance, which if I remember correctly was two songs ALL THE WAY ROSE and OLD MAN RIVER. Unfortunately I did not get any work out of this success, RAI worked on a recommendation system, and as I did not really know that many well placed people at the time like politicians or Cardinals, I found it very difficult to get anyone to sponsor me. It was actually some six months after my audition for RAI that I was asked to do another test, this time for CAM records which led to singing on corri uomo corri. But an alternative version sung by the star of the movie Tomas Milian was used instead on the movie or at least on certain prints.

John Mansell: Was this originally destined for the score and when you recorded the song who was  the conducter?
No, Milian insisted on recording a version of the song, I felt really bad about this, as I thought that he did not sing it well. At the sessions the orchestra was conducted by Morricone. This was because Nicolai who had written the music was conducting the music for another movie which had music by Morricone.these sessions had overrun so Morricone stepped in.

John Mansell: You also performed a song for the first SABATA movie, which had music by Marcello Giombini, but this was cut from the film, and has only just re-emerged on the new CD version of the score, why was this cut?
Peter Boom: I don’t actually recall the song for SABATA, I think it was something in German, the producer of the new compact disc Lionel Woodman assures me that it is me, but I still am not 100% sure, maybe I should ask Alessandro Alessandroni who also worked on the soundtrack, or Giombini himself.

John Mansell: Have you kept in contact with Giombini because you did work with him on a few projects for the cinema?
Peter Boom: We lost contact a long time ago, but I am glad to say have recently got in touch again, we both keep promising to meet up but as yet this has not been possible, he now lives in Assisi in Italy, and concentrates on the writing of sacred music, he also writes books, which is something that I also do, so we are a strange pair of artists.

John Mansell: At the beginning of the SABATA main theme there is a mischievous laugh, was this you can you recall?
Peter Boom: You know, I honestly do not remember, by that time I had sung on so many soundtracks it was hard to keep a track on them.

John Mansell: Did you prefer working with any in particular composer or composers?
Trovajoli was very nice, I did three songs with him on a film called IL GIOVANE NORMALE, which turned out to be the only film made by Dino Risi that did not do well at the box office.
Peter Boom: I must say that I found it very enjoyable working with all of the composers.

John Mansell: So were you as a singer, under exclusive contract to CAM?
Peter Boom: Yes I was, but they would only ever pay me an advance for each song, which was about 50,000 lire. I never got a percentage of the sales or the total monies that the record made, and royalties were never passed onto me. In fact CAM did not even inform me that CORRI UOMO CORRI had been re-issued onto CD. Guisseppe Giacchi who was one of the main people at CAM during the early years told me that my records sold particularly well in Japan.

John Mansell: I have always been curious about Giusseppe Giacchi, his name appeared on nearly all of CAM’s early releases I think as producer, did you have much contact with him whilst under contract to the company?
Peter Boom: Count Giusseppe Giacchi, was the driving force behind CAM. It was he who built up the company’s immense repertoire of soundtracks, which is a real treasure trove of music. He parted company with the label in the 1970s I think, I am not sure why, but the parting was a little sour, I met him again recently and he now produces programmes for television. I am thankful to him because it was he who initially approached me to go and work for CAM.

John Mansell: Would you like to see the CAM western songs LP re-issued onto CD?
Peter Boom: Oh yes, of course I would. It would be good to have a re-edited and re-mastered version available on compact disc. But I don’t think that this will happen.

John Mansell: Could you tell me what was your most successful record in sales?
Peter Boom: I was never informed as to how many copies of a single or LP had been sold. But my own personal view is that CORRI UOMO CORRI must be the most popular, but as for actual figures I do not know.

John Mansell: Have you ever given any concerts?
Peter Boom: Yes, I gave many concerts, and also worked as a master of ceremonies on many occasions.

John Mansell: As an actor did you ever have a part in a Spaghetti western?
Peter Boom: No, surprisingly enough I never worked on any westerns.

John Mansell: I do not know if I am correct or not, but I understand that you once worked as a Private Investigator.
Peter Boom: You must be a good investigator yourself if you unearthed that information. Yes I did work as a PI, this was in Rome and Milan, I did this to finance my studies, and later especially in the early 1970s I had many, many professions to try and fill in all of the financial gaps, which is something that I am still doing today.

John Mansell: You also dubbed the Italian voice of Ron Moody’s Fagin character for the film musical OLIVER, did you do this often on other films?
Peter Boom: Oh, yes that was a job that I enjoyed immensely, I liked to do this the most I think. They had tried out so many Italian actors/singers for this part and I was the one that they selected. I did on other movies but cannot remember the titles; again this was because I was very busy.

John Mansell: Many composers who wrote for the Italian western, have in recent interviews admitted that maybe their music has not stood up to the test of time, a few of them saying that they are a little embarrassed by their efforts on certain movies, how do you feel about your contributions to the genre?
Peter Boom: Well certainly not embarrassed, this was a very positive and nice period of my life and career. I feel very positive about my contributions to this genre of films. My career did however take a down turn in the summer of 1972, this was when I produced and sang COME OUT AND LOVE HIM which was the first ever gay record in Italy, it was this that really cost me my career as a singer. For me this was a big tragedy, caused by marginalization, which effectively spoilt more than half of my life.

John Mansell: Did you ever use an alias on a film?
Peter Boom: I did at certain times use an alias, but there again so did many Italian film music composers, but on many occasions I never received any type of credit for my performance, on OLIVER for example and on a RAI TV film NOAH, the technicians were credited but not any of the singers, disgraceful I think.