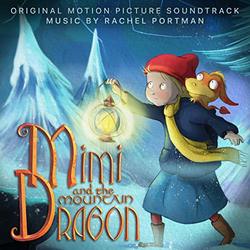 Its always good to hear something new from composer Rachel Portman, the trouble is the new scores do not seem to appear as regularly as they used too. She has a wonderfully melodic and subtle approach to scoring movies and also television and is I am glad to say one of the very few composers nowadays that still produces thematic and motif led works. Her most recent release is from an animated project, MIMI AND THE MOUNTAIN DRAGON. This a delightful tale and the music mirrors the charm and simplicity of the film. Portman has fashioned a score that is in many ways akin to her earlier works when she was still based in the UK. There is just a sound and style surrounding this work that evokes the 1990.s when I for one feel that film music was a little less soundscape and more musical. The composer underlining and kind of mickey mousing approach in a way the story as it unfolds. But in these days of hi-tec and other such things I suppose it was an inevitable that certain scores would also attempt to stay in tune with these methods. MIMI AND THE MOUNTAIN DRAGON, for me is just a great listen its subtle and emotive musical personality shining through, purveying melancholy, wonder and excitement. There are so many tantalising thematic moments, the composer employing strings, with solo piano performances, woodwind and a scattering of brass which combine and entwine to create a work that is hauntingly beautiful and at times dramatic and slightly dark. The darkness however is never around that long as the music is essentially light and lastingly melodic. I think my own personal favourite cue is FLYING, the title of the cue alone straightaway draws one to it, it begins low key, with low but rich sounding strings, piano solo is then added even though just fleeting, with the strings returning in a triumphant and lush fashion accompanied by brass, which introduce a crescendo of sorts, this then segues into a more dramatic and tense section, until the percussion begins to rumble and slightly overpower proceedings, but in the end the sound achieved is one of positivity and is enthralling and inspiring. This is a welcome addition to the Rachel Portman soundtrack collection, a score which also employs a child vocal both in the form of a song and within the actual instrumental music, which is affecting. A great work, and one you should really own. Available on all digital platforms and released by DECCA CLASSICS. A nice end to 2019.