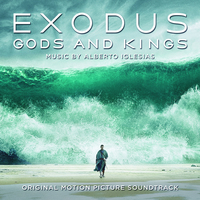 For his latest movie director Ridley Scott has turned to Spanish born composer Alberto Iglesias to write the score. EXODUS, GODS AND KINGS is the British filmmakers take on the story of Moses and the Ten commandments from the old testament, so epic material abound that is sure to thrill and enthral audiences. Iglesias has created a score that not only matches and supports the magnitude of the story unfolding on screen but it also has the ability to be intimate highly emotive and haunting. The composer bringing us a theme laden work that at times is grandiose and awe-inspiring and on other occasions becomes intricate, delicate and romantic. Iglesias utilises solo voice and also choir within the score which are able to purvey an atmosphere in the first instance of solitude and desperation and when he employs choir it conjures up a mood of greatness, fearfulness and foreboding. There is within the work a number of passages that are performed by ethnic sounding instrumentation, the composer at times combining certain ethnic instruments with a lamenting and heartfelt solo voice which more or less cries out in hopelessness or evokes a feeling of sadness that manages to invade ones inner soul and get right to your core. The work although epic and grand with sweeping themes and at times celestial sounding choral work has to it another side, the composer fuses a more contemporary sound to the established epic sound that he has fashioned with brass, strings, woodwind, percussion and choir, adding a darker and threatening sound that is underlined by minimalist use of synthetic sounds, I feel that Iglesias manages to get the balance correct and has written a soundtrack that will be appreciated by many aficionados of the art of film music. In short it is a score that posses the lushness and lavish opulence that is reminiscent of the vintage Hollywood movies such as QUO VADIS and BEN HUR but also has to it a freshness and vibrancy that maybe a composer such as the late Jerry Goldsmith would have experimented with, Iglesias has experimented with fusing these two styles and it has certainly been a success for him. EXODUS GODS AND KINGS will I think be one of the film score highlights of this year, it is a totally consuming and entertaining work, it is sorrowful, dramatic, adventurous and memorable,and contains shades of Rozsa, nuances that are akin to the style of Morricone and power and richness that could be Newman or Williams. Available as from December 2nd on Sony music. Recommended.