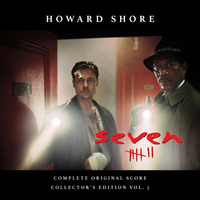 On September 16th Howe Records will release, for the first time ever, composer Howard Shore’s complete score to David Fincher’s renowned film SE7EN, this release will contain over 60 minutes of original music. The release will also boast newly commissioned liner notes by the esteemed and respected film historian and author Peter Cowie. Howard Shore is one of today’s most sought after composers whose music is performed regularly in concert halls around the world by some of the most prestigious orchestras. It is also heard in cinemas across the globe. Shore’s musical interpretation of J.R.R. Tolkien’s imaginative world of THE LORD OF THE RINGS and THE HOBBIT, as portrayed in the films directed by Peter Jackson, have enthralled people of all generations for years now. The composers work on these particular movies stands as his most acclaimed compositions to date, garnering him three Academy Awards, four Grammy Awards, two Golden Globes. His score for SE7EN has a life away from the shadowy and fear filled scenes that are being acted out in this riveting and classic tale. The music that Shore wrote for the motion picture is in a word masterful and has to it an all-consuming musical entity which is hard to escape from whilst listening to it, it has the ability to surround and completely engulf the listener plus it is an essential and important part of the motion picture, Shore creates levels of intense tension and layers of apprehensive moods via his powerful and virulent musical tapestry, the composer painting a picture that is harrowing and at times seemingly filled with sheer frustration and desperation. Shore utilizes brass and at times sinewy sounding strings to create a sound that is unnerving and totally unsettling. He also underlines the majority of the proceedings with percussive elements and at times adds to the mix woodwind which does bring a calming atmosphere into the work on occasion, however the score as one would expect is a work that is for the most part atonal sounding and also one that builds a tense and uncertain persona. This is a classic score there is no doubt of this, I feel that at the time of the movie’s release the music maybe was not appreciated and was not given the full credit it deserved, the images on screen are unsettling on their own the storyline is also one that is filled with taught and sinister musical passages. Although we are treated to a more upbeat and almost majestic cue in the form of SLOTH track number 7. I say upbeat, what I mean is that the music is actually quite forthright in the opening stages and more theme orientated than the remainder of the score. The composer creating a positive musical persona, brass and percussion fuse seamlessly and are supported throughout by strings and piano which underline and punctuate the proceedings. In many ways the score harkens back to a number of the golden age movie scores by the likes of Roy Webb, Miklos Rozsa and Franz Waxman, there is an aura about it a sound or a style that evokes days gone by, which I think are evident within the cues JOHN DOE and SLOTH there is a luxurious and sweeping atmosphere present but at the same time there is an underlying or secondary sound that is filled with dread. In track number 16, WRATH we are treated to a slow but strident piece with swirling strings and percussion acting as a background to ominous sounding brass stabs which relay an atmosphere that is filled with dire and potent connotations of the shocking kind. The re issue of this score in an expanded form is most welcome. I look forward to sitting in a darkened room (within easy reach of the light switch) listening to Shore’s inventive and highly original sounding work. This is a must have release.