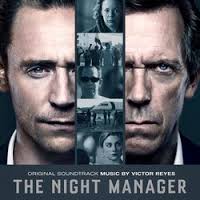 Have you been watching THE NIGHT MANAGER ? If the answer is no then why and where have you been, it is a slick and classy thriller, directed and acted wonderfully. I also have to say that the musical score by Victor Reyes does so much to support and enhance the proceedings, its about time that composers from outside of the UK had a chance at scoring productions for British TV, and THE NIGHT MANAGER is a case of this practise being highly successful. Reyes has produced a tense but at the same time richly thematic work and treats us collectors of film and TV music to a veritable delight of musical delicacies. The compact disc of the soundtrack will be issued on April 1st, April fools day, and to be honest you will be the fool if you do not add this to your collection. This is a prime example of how a television series should be scored, right from the strident and no holds barred opening theme one just becomes aware that this is a polished and dramatic soundtrack a work that is to be savoured, appreciated and soaked up by the listener. Reyes has provided this exemplary series with music that itself is exemplary, contagious and haunting. Filled with a tense and fraught atmosphere the composer adds so many levels to the action and somewhat intricate plot that is unfolding upon screen. The music underlines, punctuates and gives weight and momentum to an already powerful storyline, the composer creating memorable themes and driving musical passages that have the ability and charisma to hook the listener almost straight away, the music washes over the listener and also draws the watching audience deeper into the storyline.

The work is a fusion of both orchestral and electronic, the two mediums never grating or jarring but always complimenting and augmenting each other. I love the way in which Reyes employs solo piano and also solo violin to purvey a sense of fragility and vulnerability, but saying this even when the score is at its most melodic it still has to it an aura that oozes apprehension and uncertainty as if it is making you aware that all is not quite right. The composer conjures up a mood that is overflowing with urgent and taught atmospheres, which play against the more melodious and low key parts of the work, sweeping strings backed by almost martial sounding percussive elements combine to create impressive and memorable moments within the score, and the composer also weaves into the fabric of the work ethnic sounding passages. Reyes is in my opinion a master at bringing into play subdued and light musical touches that work magnificently, at times his style and approach to scoring reminds me of Thomas Newman,Reyes employing a simple and delicate method but one that is powerful and memorable and one which produces darkness, mystery and gorgeous flowing melodies that purvey shade and light. Reyes is no stranger to writing music to heighten tensions and elevate scenarios that are taking place on screen, his score for GRAND PIANO proved this and THE NIGHT MANAGER is another such example of music working perfectly with images. This is definitely one to add to the collection.