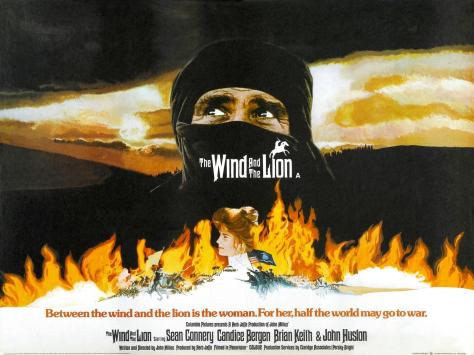 THE WIND AND THE LION is a movie I have to admit I loved from the first time I saw it, it has everything, action, romance, great landscapes and locations and a cast of impressive actors that include Sean Connery, Candice Bergen, Brian Keith and John Huston. Loosely based upon the Perdicaris incident which took place in 1904, the film was written and directed by John Milius. The filmmaker based his story on a number of what he described as adventure stories, which ranged from an article by Barbara W. Tuchman and also the writings of Rudyard Kipling to Rosita Forbe’s 1924 biography RAISULI THE SULTAN OF THE MOUNTAINS.

The latter being at times quoted word for word within the screenplay. Milius wanted to evoke the adventure and excitement of films such as GUNGA DINN and others like it. And even turned to the works of Akira Kurosawa and the British publication BOYS OWN for his inspiration. The result is a movie that although not totally accurate historically is probably one of the most entertaining and exciting that was produced during the 1970’s. Released in 1975, the film drew minor attention and was surprisingly accepted by the critics even though it contained an attitude that endorsed American Imperialism which in the aftermath of the Vietnam war was somewhat unpopular. The musical score was by American film music maestro Jerry Goldsmith, who penned a magnificent and grand epic sounding work. It is in my opinion one of the composers best works for cinema. Its brass flourishes and pounding percussive elements add authenticity and stature to the movie, with Goldsmith’s edgy by also sweeping strings evoking the sound and style of bygone days from film music history. It also manifested strong thematic properties and styles that were to influence the composers later works such as MULAN, THE 13TH WARRIOR and FIRST KNIGHT. 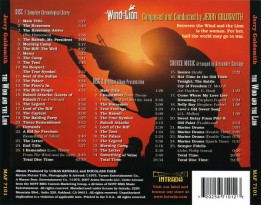 Its proud but at the same time menacing horns and driving strings which were already a trademark of Goldsmith become even more prominent and effecting within this movie, the score becoming not just a background or an accompaniment to the action, but an integral and essential part of the film itself. The love theme from the score I REMEMBER is too text-book Goldsmith, with eloquent and effecting strings that tug at the emotions, with their sumptuous and lush sound overwhelming the listener whilst also enhancing and supporting the scene being acted out on screen. THE WIND AND THE LION is an epic tale, and the composer stepped up to the mark when writing the score, it is a grandiose and thrilling work, and one that I know is so popular amongst connoisseurs of expressive, exciting and lavish film music. Originally issued on ARISTA records on LP there was also later a compact disc on the Intrada label, which was the same line up as the original Arista release, in recent years an expanded version of the score was released also by Intrada records as a two disc set. It remains one of Goldsmith’s most memorable soundtracks. If you have not heard this then purchase any version that you can just to hear the booming and grand opening theme or thrilling RAISULI ATTACKS. If you have the single compact disc version it is essential you get the two disc set of this classic.