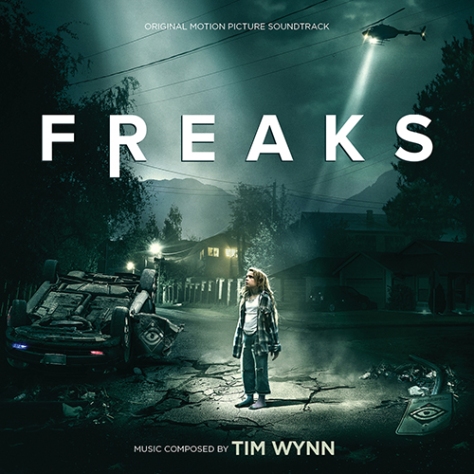 FREAKS is a sci-fi psychological thriller, which was written and directed by Zach Lipovsky and Adam B Stein. It tells the story of a seven-year-old girl, Chloe, who has been controlled and protected from the outside world by her Father. The movie premiered at the Toronto International Film Festival where it was nominated in the category of Best Canadian Feature Film. The musical score is by Tim Wynn, who is based in Los Angeles and has worked on feature films, TV series and video games. The composer began writing for media in 2004 when he worked on THE PUNISHER video game, He studied at USC under the likes of Jerry Goldsmith, Elmer Bernstein, Buddy Baker and Christopher Young and to be honest all of the influences from these composers shines through at times within the score for FREAKS, but saying that there is also a wonderfully original sound to the work. The score is built around a five note motif which is Chloe’s theme, this is heard throughout the soundtrack in varying musical guises and arrangements, but what struck me about the score was that although there are many dark elements within it, it remains melodic and haunting in an attractive way. The work is a combination of both conventional orchestral performances and synthetic creations, it has a tense and unsettling air to it at times, but as I say this is invariably diluted because of the childlike and playful five note combination which accompanies Chloe in her discovery of the outside world. I can honestly say that there is not one track on the recording that I would skip over, or could I pick out any one track over another as this is a wonderful soundtrack that is overflowing with an emotive and affecting quality. Each and every composition being rich in melody, whether it be fleeting or more pronounced, it is a sensitive and alluring work and I hope one that will be released onto CD soon. Available digitally from the ever industrious and pioneering soundtrack label, Movie Score Media.