Born into a Jewish family, Lionel Begletier was the youngest of seven children who were brought up in Stepney in the East End of London, His Father was a tailor. Lionel Bart as he was to become known as received no real formal musical education apart from a few violin lessons, but he soon became disinterested in these and his Mother very quickly literally threw out the violin he was practicing upon. However because of the young Lionel’s interest and aptitude for music his teacher declared that he was a genius and at the age of 16 he won a scholarship to St Martins school of art and began to become involved not just in music but in set decoration painting sets for plays etc. Whilst at the school he saw a notice advertising for song writers and it was this decision to make a career change that altered his life forever, it was during this period that he also decided to change his surname name to Bart, apparently this was inspired by a bus journey that took the young lyricist and composer past ST BARTHOLOMEWS church every day, the Church which was known by locals as St Bart’s attracted Lionel’s attention and he decided to become Lionel Bart. Bart’s first foray into writing a musical came in 1958 when he came up with WALLY PONE OF SOHO, this was not that successful and although it did attract some attention it was not a runaway hit for Bart. It was at this time in his career that he wrote songs for a number of  British rock and roll artists of the day, Marty Wilde, Billy Fury, Cliff Richard and Tommy Steele among them. 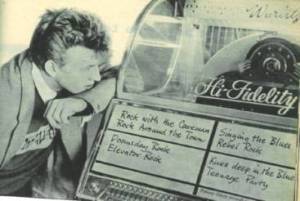 Many of these such as LITTLE WHITE BULL, ROCK WITH THE CAVEMAN, LIVING DOLL etc becoming iconic and enduring favourites worldwide. The latter reaching number one in the hit parade of 1959 and staying there for 6 weeks. His first success in the world of musicals came in 1958/59 with FINGS AI’NT WOT THEY USED TO BE and after this he teamed up with composer Laurie Johnson to bring LOCK UP YOUR DAUGHTERS TO London’s West End. 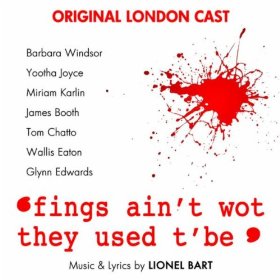 It was also at this time that Bart began to develop more fully an idea he had for a musical which was based upon a classic tale written by Charles Dickens, OLIVER which Bart decided to set to music after seeing the David Lean film version of the story eventually came to the stage in the June of 1960, this was after numerous promoters and companies turned it down, resulting in Bart financing the production him self. Bart was convinced that the show would be a flop and apparently did not stay in the theatre on the first night instead taking himself off elsewhere with actress Barbara Windsor only to return at the end of the musical to receive no less than 16 curtain calls, and soon the show had advance sales of 30,000 in its first week. Based on the success of OLIVER Bart became much in demand and soon had two other musicals to his name in the form of MAGGIE MAY and BLITZ which although did not have the same appeal as OLIVER were still nonetheless lucrative ventures for the composer. It was also at this time that he wrote the title song for the Bond movie FROM RUSSIA WITH LOVE as well as co-writing with and for Anthony Newley, it seemed that Bart was unstoppable and at the age of just 30, he was rumoured to be earning £16.00 an hour which in the 1960’s was more than impressive. Bart’s next musical TWANG (1965) was based on the story of Robin Hood  but on this occasion it was not such a rosy tale for him, especially as to finance its production he sold off all the rights to OLIVER. TWANG failed miserably and ran for less than a month, its disastrous opening night saw scenery and sets collapsing and “boos” and shouts of “GET OFF” coming from the audience. Bart estimated that the ill fated TWANG  lost him over a million pounds and also lost him the rights to his most successful venture OLIVER.

In 1968, Columbia pictures produced a film version of the musical OLIVER, Directed by Carol Reed and starring the wonderful Ron Moody as Fagin, with Oliver Reed as Bill Sykes and Shani Wallis as Nancy, it also featured young actors Jack Wild as the artful dodger and the angel faced Mark Lester in the title role. The movie was a runaway success being nominated for 11 Academy Awards and winning in 6 categories including best original score, but this must have been a bittersweet success for Bart as he had relinquished all rights to do with the musical.  In 1972 he became a bankrupt with debts of over £73.000. Bart had also began to drink heavily which resulted in him contracting diabetes, he did manage to win his battle with alcohol and drug addiction but had done irreparable damage to his liver and his career hit rock bottom, he did however still carry on working and in 1977 penned the musical LIONEL, but compared with his success from previous years it paled in comparison. Bart did however manage to return to the public eye when OLIVER was revitalised for the west end by Cameron Mitchell during the early to mid 1990‘s, Cameron who had secured the rights had written into the deal that some of the royalties would be paid to Bart. The lyricist took on a supervisory role for the comeback production and once again was his old flamboyant and larger than life self. He also penned HAPPY ENDINGS for a commercial that was run by a building society which reached number 65 in the UK charts and wrote numerous other jingle type compositions for advertisements on both radio and television. After OLIVER was revived it gave Bart more drive and he began to work on a number of projects that had for many years been gathering dust, i.e. QUASIMODO, which was based upon THE HUNCHBACK OF NOTRE DAMME. Lionel Bart died of cancer on April 3rd 1999 at Hammersmith Hospital London aged 68.