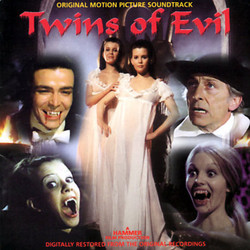 Now this is also a score that for years was on the wants list’s of many soundtrack collectors, the theme first appeared on the GDI compilation MUSIC FROM HAMMER FILMS Vol.1, this certainly whetted the appetite of countless hungry soundtrack enthusiasts for the complete score to be issued, and in true GDI form the label did not disappoint. The CD is packaged marvelously, the thick booklet is crammed with stills, pictures and posters of the movie, with an informative set of notes and extracts from an interview with the composer Harry Robinson. The opening scene of the movie is one of Hammers best, and prior to the credits we see Peter Cushing and his band of merry pilgrims on horse back riding through the night to find a helpless maiden to burn at the stake, as the flames lick around the young girl whilst Cushing and co. stand watching the frame freezes. Robinson’s theme begins, at first in a subdued fashion, slowly building gradually and anxiously, the composer utilizing timpani and percussion as a starting point whilst French horns are introduced and begin to perform the central theme, the track builds and builds until the full orchestra join the proceedings creating a theme that has certain western sounding properties to it.

In fact Robinson remarked that when he first saw the rushes of the film he straight away thought ‘western’. ‘Well there were horses in it so why not, I have always wanted to do a western’. The remainder of the score is just as strong and lively as the central theme, and the composer again serves up a musical smorgasbord of tense and suspense filled cues, which although at times are less than melodic still remain memorable.
TWINS OF EVIL is a soundtrack that should be in every collectors possession even if they are not Hammer fans and one that is surely the best of Hammer and certainly a score that can be deemed among Harry Robinsons most accomplished.