There have over the years been many compilations released under the title of THE FILM MUSIC OF a number of these have concentrated upon the music of British composers and also music from British movies of the 1930,s through to the late 1950,s and into the 1960,s. this was I truly think the Golden age of British film music where composers such as John Addison, William Alwyn, Sir Arnold Bax, Sir William Walton, Richard Addinsell, John Ireland, Malcolm Arnold, Stanley Black, Alan Rawsthorne, Clifton Parker, Vaughn Williams and many others applied their expertise and musical prowess to the world of cinema. Many of the composers who were involved in the scoring of British movies back in the 1940,s through to the late 1950,s were in fact classically trained and began their musical careers by writing for the concert hall in fact a number scored films for a while and then returned to “SERIOUS” music. These compilations of course were re-recordings which are excellent and wonderfully reconstructed and performed. However there are a couple of compilations that I would like to bring your attention too, BRITISH FILM MUSIC Vols 1 and 2 were released by Pavilion records ltd on the Pearl label. These two compilations have within their running time some classic British movie music and also contain the odd obscure piece from a movie that maybe we had forgotten. The difference between the Film Music of compilations and these is that they are the original recordings which include selections from the scores of movies such as THE RED SHOES, OLIVER TWIST, SCOTT OF THE ANTARTIC, THE OVERLANDERS, WHILE I LIVE, MALTA G.C., 49TH PARALELL, DANGEROUS MOONLIGHT, THE STORY OF A FLEMISH FARM, NICHOLAS NICKELBY, COASTAL COMMAND, THEIRS IS THE GLORY, THINGS TO COME and WESTERN APPROACHES to name just some of the titles. 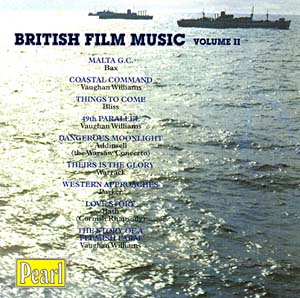 Considering the age of the recordings it is surprising that they are so clear and sharp of course there are a few sections that have not weathered so well but I would not say that these are terrible and both of the compilations are an enjoyable listen and also a glimpse back into the heyday of British cinema and also into the Golden age of British movie music. I was particularly drawn to Arnold Bax’s music for the 1948 production of OLIVER TWIST and the beguiling and alluring piano performance of Harriet Cohen on the scores central theme and throughout the remainder of the work. Piano was an instrument that was featured a great deal within film scores throughout this period, examples of this can be heard within the two discs. On volume 1 for example we are treated to the glorious DREAM OF OLWEN from the 1947 production WHEN I LIVE penned by Charles Williams, with the piano solo being performed by Arthur Dudley and the stirring and melodious strings of The National Symphony Orchestra under the baton of the composer.
This section also includes incidental music from the score which is a delight to hear. There is also a beautiful but at the same time slightly urgent piano solo on MEN OF TWO WORLDS by Arthur Bliss with the solo being performed by Eileen Joyce that is supported by choir, subdued woodwind and strings. Volume 1 also features The Prelude and Ballet Music from THE RED SHOES composed by Brian Easdale and performed by the Philharmonia Orchestra conducted by Muir Mathieson. This first disc also contains John Irelands rousing and robust sounding music from THE OVERLANDERS (1946), Vaughn Williams stunning work for SCOTT OF THE ANTARTIC (1948) which is a score that influenced many composers who followed such as James Bernard and Malcolm Williamson. Volume 1 also contains selections from Lord Berners score to the 1947 production of NICHOLAS NICKLEBY which is filled with charm and elegance but includes its fair share of drama. LOVE STORY from 1944 contained a score by Hubert Bath and it is his CORNISH RHAPSODY that represents his score on this compilation which is track 19 on volume 2. Overall these two compact discs are an excellent purchase and are certainly an entertaining collection and representation of British Film Music, a great addition to any film music collection. Volume 1 runs for 74 mins and Volume 2, runs for nearly 80 mins. Informative notes are included in both volumes which make fascinating reading. Well worth having.