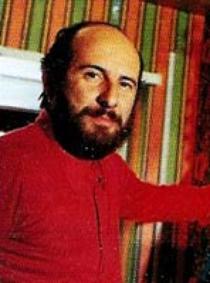 Marcello Giombini was born in Rome Italy on July 24th 1928, from a very early age Giombini would practice playing organ in a number of the churches in the Italian capital. Whilst he was gaining experience at becoming proficient in playing the organ he also began to study musicology and philology and would research both of the subjects within the vast libraries that were available in Rome. Giombini is predominantly known for his compositions for the world of film, but the composer also wrote numerous pieces for concert hall performance which he became in demand for during the 1950,s and 1960,s when a number of his compositions were performed by the RAI orchestras and these performances were broadcast on both television and radio, the performances for radio were all live. He began to write for the cinema in the early part of the 1960,s his first film score is recorded as VULCANO-FILGIO DI GIOVE in 1961 which was directed by Emimmo Salvi, he continued to write quite prolifically for the cinema through to the 1980,s his last film score being in 1984 for LE SCHIAVE DI CALIGOLA which was directed by Lorenzo Onorati.

Giombini made some important contributions to the genre of the Italian or Spaghetti western, SABATA, RETURN OF SABABTA, GARRINGO,(aka Sabata the killer) ACQUASANTA JOE, BALLATA PER UN PISTOLERO among them, Giombini also provided a fully electronic score for IL MIO NOME E SCOPONE E FACCIO SEMPRE CAPPOTTO IN 1972 FOR DIRECTOR Juan Bosch, which was last Italian produced western to star Anthony Steffen. The Maestro contributed strong soundtracks for many varying genres and was able to adapt to each and every scenario. The composer also acted as director of THE CHORUS OF THE ROMAN PHILHARMONIC ACADEMY with whom he recorded a disc of renaissance music, this included an edition of the story of music which was commissioned by RCA under the direction of Cesare Valabrega. The maestro was also responsible for researching the edition of the resurrection of the body of The Knights of Emilia. In Giombini’s opinion the turning point in his career came with the composition of THE MASS OF THE YOUNG FOR SHOUTING, GUITARS, KEYBOARD AND PERCUSSION, which received its premiere performance in the oratory of San Black Filippo on April 25th 1966.

In recent years the composer dedicated himself to the composition of sacred music, and in 2002 recorded a number of Psalms taking his inspiration from the contemporary musical palette and combined a new age style of music with Biblical texts. The composer was also a pioneer in the field of electronic music and worked on a number of science fiction movies adding his own particular innovative style of electronic pop to the proceedings; he wrote film music under the alias of Pluto Kennedy and also at times went under the assumed name of Marcus Griffin. After the 1980,s Giombini seemed to become something of a recluse and would not discuss his music for film at all.

He composed the music for well over 80 motion pictures and it is sad that many of these shining examples of Italian film music still remain unpublished.   He died in Assisi on December 12th 2003.