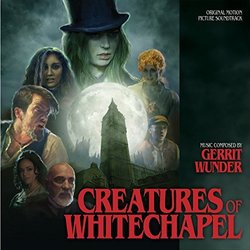 Another wonderful release from Movie Score Media, and yet again it is a score that most probably would not have seen the light of day if it were not for this now renowned soundtrack label. The film is an interesting take on the Frankenstein story. Set in the squalid and eerie Victorian London of 1888, we see Jack the Ripper causing terror and mayhem stalking the streets of the fog shrouded Metropolis killing and dismembering the victims so that She can supply her Master Dr. Frankenstein with the vital organs and body parts for the unspeakable creation that he is hoping to bring to life. The attacks that Jack is carrying out become high profile and the authorities and the inhabitants of Whitechapel are becoming increasingly aware that it is Frankenstein who is behind them, thus Jack is sent to do one last dire deed and obtain one last but vital part that will give life to the creature. This is a somewhat perverse and twisted slant on Mary Shelley’s infamous tale and brings together some of the most iconic figures in Horror history in a fashion that has never been imagined before. Directed by Jonathan Martin who also was responsible for another recent short film KISS THE DEVIL IN THE DARK, he is a multi-award winning film maker who gained much recognition for his work on the short film AN EVENING WITH MY COMATOSE MOTHER. 2016 has been a particularly busy year for Martin as he worked on both KISS THE DEVIL IN THE DARK, CREATURES OF WHITECHAPEL and a handful of music videos which included MY ETERNITY, DEMONS, and GRAVITY. The musical score for CREATURES OF WHITECHAPEL is the work of composer Gerrit Wunder who also scored KISS THE DEVIL IN THE DARK which was released earlier this year by Movie Score Media. Like his previous score for director Martin, CREATURES OF WHITECHAPEL is a fusion of both symphonic and electronic styles, but saying this I am of the opinion that the symphonic approach and content definitely has the upper hand, the composer making effective use of strings and percussive elements throughout and fashioning a chilling and tense work that for me anyway evokes the sounds of both the Hammer horror classics and those marvellously atmospheric Universal filmic masterpieces with the now iconic monsters such as The Wolf man, Dracula and Frankenstein’s creature from the 1930,s and 1940,s. CREATURES OF WHITECHAPEL I personally feel is more of a developed and structured score than KISS THE DEVIL IN THE DARK, there is more thematic material present and the composer seems to have created a far more robust and powerful sound and style for this particular assignment. There is a darkness present that is laced with hints of romanticism throughout, with the composer providing the film with some elegant and haunting moments some of which are performed on harpsichord and solo violin.

It is an accomplished and polished work that is an interesting listen and a pleasurable one too. The release opens with the swirling and highly tense cue CREATURES OF WHITECHAPEL which is the opening theme for the film, the composer seems to have put everything into this piece, racing timpani, booming percussion, driving strings and fierce, intense sounding brass, which open the score wonderfully and prepare us for what is to follow. Track number two is an interesting piece, LONDON 1888 JACK THE RIPPER also has a kind of sweeping or swirling persona to it, strings again are the main stay instrumentation, with sporadic flourishes from harpsichord, and punctuation stabs being supplied by the brass section, there is also a brief appearance at the start of the cue of choir or at least breathy voices, which add a foreboding and chilling element to the composition. The composer also weaves an organ into the proceedings that is eventually overwhelmed by hissing and driving strings that end in a crescendo that is filled with apprehension and dread. The composer employs an almost classical approach within several of the cues, by this I mean the orchestration evokes the style of Bach or at times has hints that could be associated with Mozart, which cannot be a bad thing. The score for THE CREATURES OF WHITECHAPEL is superbly rich and darkly alluring, it also has some highly effective action led interludes which as I have already stated do at times have a certain affiliation with the style and sound that has become associated with the films of the Hammer studios and created by composers such as James Bernard, Don Banks, and their like. The work is also augmented and further supported by the use of choir which it self brings a sense of urgency and impending doom to the soundtrack. There is however a style and sound present that is fresh and original and the various styles when fused and combined all complement each other and work as one to go into the creation of a score that is excellently thematic but at the same time highly atmospheric and affecting. This is one to add to your collection. Do not miss this release.