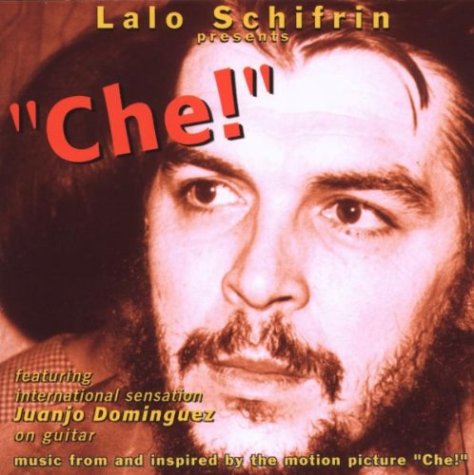 Lets, go back to 1969, I was 14 years of age at the time, and was I suppose starting to fall a little bit in love with cinema and film. My main passion then as it is now is music from film or film scores. I remember purchasing one particular long-playing record on the Polydor label, it was the soundtrack to the movie CHE, directed by Richard Fleischer and starring Jack Palance as Fidel Castro and Omar Sharif as Che. The music was by composer Lalo Schifrin. He was a perfect choice as he fashioned not only a driving and dramatic musical score but also was able to provide South American rhythms and beats that lent much to the story that was unfolding on screen. Schifrin’s score was and still is one of my most played soundtracks, he captured perfectly the rawness, the ambience and the sounds that were Cuba at a time of turbulence, uncertainty and revolution as the country experienced the darkest of days but then was taken from the shadows and led into the light by a leader who they adored and became loyal to above all others.

The composer created a wonderful score that is filled with action pieces that are featured alongside steamy sounding sambas and tangos, the composer employing trumpets, woods and piano that lay out tuneful and infectious sounding compositions supported by a variety of percussive elements that mingle and lace the main substance of the cues. The guitar also features highly within the score, Schifrin, building many of the cues upon the instrument and it acting as a firm foundation for the composers haunting thematic properties. The original album release featured 12 tracks and a subsequent CD release had a further 4, cues but these were more of the music inspired by variety rather than the composers original score. The track that has always stayed with me is LA COLUMNA which begins with some great percussion, that is underlined by strings then piano and more strings which are carried along by the building and relentless percussion, shakers, bongos, and drums combine to create this head spinning and infectious rhythm and Schifrin introduces his soaring and flyaway strings that weave in and out of the beats to create something that is very special. Another action piece is track number 5. LA RUTA again the composer employs percussion and piano as a backdrop to driving and slightly threatening strings that are punctuated by jazz influenced woods and piano. Its one of those scores that gets inside your head and once you have heard its many and varied themes you will never forget them. Just take a look at the musicians involved on this scores original recording..
Bass – Bill Plummer, Humberto Cane
Bells [Inca] – Ken Watson
Charango – Al Hendrickson
Composed By, Conductor – Lalo Schifrin
Drums [Bolivian] – Larry Bunker
Engineer – John Neal
Executive-Producer – Roy Silver
Flute [Bolivian] – Bud Shank, Justin Gordon, Ronny Lang, Sheridon Stokes, Ted Nash, Tom Scott
Flute [Wooden] – Jose Lozano
Guitar [First] – Tommy Tedesco
Guitar [Second] – Bob Bain
Guitar [Three String] – Lalo Ruiz
Harp – Catherine Gotthoffer, Dorothy Remsen
Percussion – Armando Peraza, Chino Valdez, Francisco Aguabella, Jose Mangual, Julio Collazo, Mongo Santamaria, Orlando “Cachaíto” López, Orlando Bertran
Piano – George Del Barrio
Producer – Don Shain
Strings – Baja California Chamber Orchestra
Tipple – Dennis Budimir
Voice – Kaskara