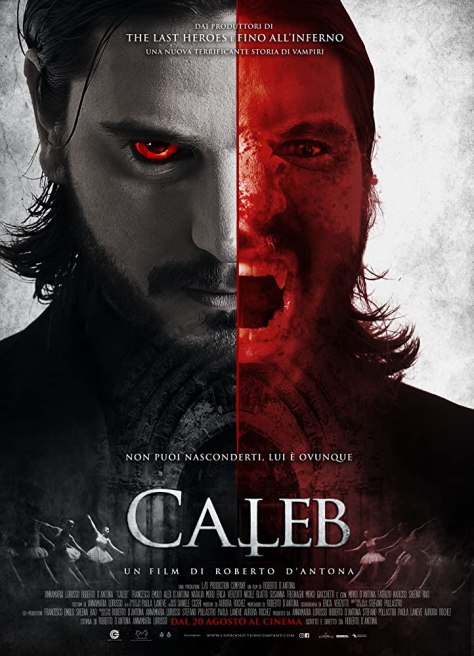 CALEB, is a classy but at the same time gory horror thriller, the plot focuses upon a woman, Rebecca who is desperately searching for her sister, who has disappeared. Her sister is a journalist who set out to investigate a series of suspicious occurrences but has vanished. Rebecca who is her older sibling, tracks her down to a town called Timere, which is in a remote area of the countryside hidden away from the gaze of everyday life. She begins to make enquiries but soon discovers that the locals are not keen to speak to her. She also notices a fear there of dark and evil forces which force the towns folk to remain in their homes after dark. She however does encounter the church warden who is a writer and has an encounter with a handsome and beguiling man named Caleb. He is rich and charming, but she soon finds out that his outwardly elegant and gracious persona is concealing a dark and terrible truth. It is not long before a desperate battle between the forces of good and evil commence. Directed by Roberto D’Antona, who also takes the title role in the movie is an edge of the seat movie and has to it a virulent yet thought provoking aura running through it. Yes, it is a horror movie, and has at its core the subject of vampirism, but it is a film that is entertaining in a scary sort of fashion. It mixes contemporary with Gothic elements, that fuse together well. I think you will if a fan of horror be entertained by it. The musical score is a strong one, it is dark and foreboding and has a sense of the harrowing, menacing and chaotic.

The musical score is by young Italian composer, Aurora Rochez, and I have to say this is an impressive and extremely appealing work. As far as I can tell it is in the main made up of a foundation which consists of strings and piano, on which the composer builds the remainder of the soundtrack, layering synthetic sounds and electronic support to create a score that is effective within the movie and also is in many ways entertaining to listen to without any images or storyline. It has to it a luscious and opulent persona that seems to embrace the subject matter and fit the storyline like the proverbial glove. The apprehension and tension that the composer conjures up via sinister sounds and ominous but subtle layering and segueing of unsettling strings and icy and visceral synthetics is affecting. There is a feeling of dread and doom here, the music is mysterious and spine chilling, adding greater levels of horror and shock to the proceedings.

It is also a score that contains inventive use of percussive elements, at times percussion taking the lead in certain cues, and only after a while of the percussion laying down the style and creating the required atmosphere does the composer add to it in the form of dark stabs and low sombre strings. Solo piano raises its head every so often within the work, it is I have to admit a welcomed interlude that is at times calming but also at the same instant its calming element becomes an even more unnerving sound and fashion a mood that is even more unsettling and unpredictable.

The cue I AM A VAMPIRE is superbly urgent and threatening, it brings into the equation choral work brass flourishes and racing swirling and frenzied strings which al are driven along by percussion.  There are a few lighter sections, but these are few and far between, one track aptly entitled THE CALM BEFORE THE STORM is a delightfully delicate piece, synths and piano working together to create a Vangelis like sound that is restful and charming. But this is short lived as we soon return to the dark and the foreboding atmosphere. Certainly, worth checking this one out and whilst you are there also take a listen to her score for THE LAST HEROES which I think is also a worthy addition to any collection, both are available on digital platforms.